One of my early blog posts discussed literary voice as a basis on which to establish the majority of psalms – particularly the “lamed-David” ones — as the work of a single poet. Although there is not universal agreement on that point, there is not much lively argument against it either. But a persistent, millennia-long debate continues to rage around the question of who that single poet is.

For me, as for many others, the answer is clear. I came to it first simply on what one might call the basis of faith. Then later, I objectively confirmed that initially belief-based premise through a deliberate process of comparing the voice that we know to be David’s to that of the poet of more than half of the psalms.

Follow along a path of inquiry with me. Like any path, it may meander some. But after all, so do the psalms themselves sometimes.

You might be thinking this sounds like a foray into a dry academic forest. I’ve made this trek before and promise it won’t be. It seems more like walking toward a large meadow. At first all you can see is the vastness of the field. Then, as you draw closer, you notice a faint outline in the vegetation and assume it’s a common Canada goose. You trudge on, and suddenly a whole flock of rare grey geese lifts itself from the tall grasses. In that glorious moment you see something you have never encountered before and that you will never forget. 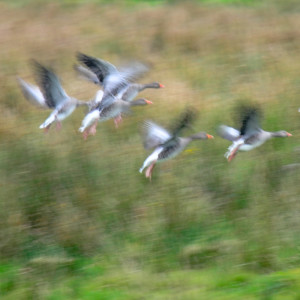 Let’s set these two intertwined questions as the departure point of our exploration: To what exactly am I referring when I say the words we “know to be David’s”? And how do we know they are his? My reference is to instances when David spoke in the presence of others; then what he said is recorded, either by those hearers themselves or by scribes who base their record on the testimony of those witnesses.

There is nothing unusual about taking this approach to verifying “speakership” and then establishing authorship. In fact, we who believe that the Bible is Holy Writ take for granted that when the text presents a passage as something Moses said, then Moses said it; or that what it indicates Samuel or Elijah uttered were actually their words; or that what are recorded as Jesus’ conversations and parables, he actually spoke and taught. The same is true of the public statements attributed to David.

There are many places we could go to find David’s words. 1 and 2 Samuel are essentially David’s biography. Two very famous poems are recorded there. One is in 2 Samuel 1, where we read David’s great lamentation in response to the deaths of Saul and Jonathan. Another example is found in 2 Samuel 22 and is referred to as David’s Song of Deliverance on the occasion of his escape from his enemies’ and Saul’s hands. (And, yes, the chronology is confusing). Both clearly establish David as a poet of exceptional talent. The second poem, with very little revision, also appears in the psalter as Psalm 18. It is epic in proportion and diction and a fine example of David speaking as the leader of the people.

But I want to direct us elsewhere, to look at the more private and vulnerable David, the fellow more akin to the speaker in so many of the psalms. Making the assumption that final statements are particularly important, I want to look at dying David’s last words. Such words reveal what occupies a man’s heart when he knows he has little left to say and that what he does say is likely to be remembered.

Here is David’s final utterance as recorded in 1 Kings 2, which scripture says he “commanded” his son and heir to his throne, Solomon, to obey:

“I am about to go the way of all the earth. Be strong, and show yourself a man, and keep charge of the Lord your God, walking in his ways and keeping his commandments, his rules, and his testimonies as it is written in the Law of Moses, that you may prosper in all you do and wherever you turn, that the Lord may establish his word that he spoke…” (ESV)

You may reasonably be wondering if we have wandered off the path. No, we have stayed firmly on course. The words highlighted in italics in the passage above are some that are repeated again and again in the psalms of David. They are part of a group of twelve key words that are the heartbeat of David’s psalms and the lifeblood of his faith.

So, has our journey down this path established Davidic authorship of the psalms? No, not yet. But I believe it has brought us to an important trail head.  Our expedition down the larger, longer road will need to wait until the next post. The first provision we will get then before we depart will be the list of those twelve words — the essential lexicon of the life of David’s, and perhaps our, faith.

Now you need to make some preparations. Begin here: meditate on David’s last words to his son. Then read Psalm 19 intently, and more than once. You can use your own Bible or follow the link that I have put at the end of this post. It will take you to Psalm 19 in the English Standard Version (ESV).  This is the translation of the psalms that I prefer, as I find it the most accurate in its rendering of original Hebrew (based on the Masoretic text). Whatever translation you choose, contemplate the similarities between Psalm 19 and David’s final pronouncement.

That is where we will pick up together next time…and proceed together from prayerful “commandment,” to Psalm 19, through holy words and a holy alphabet to the grand psalm of grand design–the 119th. I have said before that I believe Psalm 119 is Davidic; I have declared it as well to be the temple David built with words, when he was denied the privilege of building one of wood and stone.

He always carried the blueprint in this heart.

Here is the link to Psalm 19 in the ESV.