“Incline our hearts to keep this law.” Each of the first four Sundays of Lent the order of worship in my church begins with the congregation repeating that refrain nine times, in response to the pastor’s recitation, one by one, of the first nine commandments of the Decalogue. In that practice we unite ourselves not only with one another who are present but also with innumerable others, across centuries and geographies, with whom we acknowledge that our shared faith is rooted in Judaic practice and heritage. And thus we claim our connection to the great psalmist David as well.

The six words quoted above are actually part of a longer corporate response, namely: “Lord, have mercy upon us, and incline our hearts to keep this law.” The tenth and final refrain, in response to the last of the Ten Commandments, is slightly but profoundly different. “Lord, have mercy upon us, and write all these your laws in our hearts, we pray.”

In opening worship services in this manner during the weeks leading up to Palm Sunday, we are communally and personally admitting that we are mortal, we are fallen, we are flawed, we are sinful and we are not inclined by our human natures to keep God’s laws. That is a changeless and sober reality. Try as we might we simply cannot ever, of our own accord and in our own strength, “keep” even the majority of God’s commandments much less fastidiously and reverently observe His whole law. We need the Lord’s mercy; we are utterly reliant on Him not only to incline our hearts to His ways but also to inscribe all His laws there so that they are ever present with and in us.

Those truths and narratives may seem far afield from Psalm 119, but they are not. They are all a piece of one wondrous story that also stands firmly at the very heart of this beloved ancient, and I believe often misconstrued, poem. In fact, our Lenten refrain might well be considered the topic sentence of David’s magnum opus, for it closely mirrors his words. Verse 36 of the psalm implores “Incline my heart to Your testimonies” (ESV).

Given that direct plea, I find it perplexing that for hundreds of years so many godly scholars and noted Biblical commentators have seemed to regard the psalm as though its entire emphasis is on the law alone, presented by David as it is through the so-called nine “pattern words” that refer to various aspects of it. Those exegetes seem to hop right over the opening of this particular verse (as only one clear example of what I sincerely but humbly believe are serious oversights) and in doing so veer toward what can come close to extolling, or leading others to extol, legalism as a holy virtue. At the same time, whether consciously or not, they imply that approach to have been David’s view. But the poet’s carefully chosen words, just as carefully examined, indicate otherwise.

Read verse 36 with the same mindfulness that the poet employed in penning it. Consider the grammatical structure. The subject, the strength, the critical focus of the line is the verb clause “incline my heart” and not the prepositional phrase “to your testimonies.” 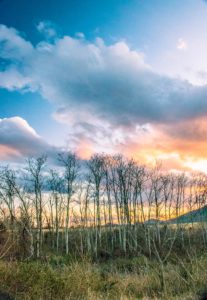 Lest my meaning be misunderstood, I need to clarify two things. First, I am not suggesting that we ignore the prepositional phrase. It is as critical to the meaning of verse as is the verb clause. But the clause takes primacy in establishing the essence of the statement. Second, I in no way mean to diminish the importance of God’s law in Psalm 119 or anywhere else, for that matter. It is, after all, not only given through words and the Word to mankind but it also stands at the core of the entire created order. It can and does exist on its own and apart from mankind. The psalmist knew and acknowledged that fact frequently, but perhaps nowhere more eloquently than in the opening verses (1-6) of Psalm 19. But the grand Psalm 119, a poem that I believe is rooted in and akin to Psalm 19, pertains to much more than the merits of God’s law. It concerns itself primarily with inviolable covenant, the heart relationship of a perfectly holy God with His imperfect children, a Creator and Redeemer who longs for their fellowship, fealty, well-being and ultimately their salvation. And He graciously imparts to them His instructions and protections to lead them safely in that path.

The foundation and purpose of such a covenant cannot be found in the nine law words alone; those depend, as I suggested before, on the interplay of the twelve key pattern words of Psalm 119. Let that be our gateway to beginning our reflection on David’s repeated use of the “other three” pattern words– heart, servant, righteous/righteousness — together with the nine that are commonly cited.

We need not read far into the psalm to find the first. Heart appears in the second verse: “Happy are those who keep His testimonies, who seek Him with their whole heart.” There is the clarification of what it means to keep his testimonies, or any of the other eight aspects of law that the nine words describe. We keep the law by seeking God with our whole hearts, and when we seek Him with our whole heart, states the psalmist king whom the Lord Himself called a man after His own heart, then we are more than obedient — we are happy, we are drawn into closer fellowship with Him, we are open to God’s inclinations and inscriptions on our hearts and for our lives.

The necessity of seeking and possessing an inclined heart, so to speak, did not originate with David, of course. It is the condition that the Lord prescribes for His people. The giving of the Mosaic law, the Decalogue, is recorded in the fifth chapter of Deuteronomy. Following shortly thereafter, in Deuteronomy 6:5-6, are these words: “You shall love the Lord with all your heart and with all your soul and with all your might. And these words I command you today shall be in your heart.” There is that word  — heart– again, this time uttered twice by God. The substance of the law, He is declaring, does not consist of the sum of rules, commandments, statutes. The substance of the law is covenant. By their very nature, covenants require at least two parties.  Although the Holy One surely did not need to justify His commandments and requirements of His people, this covenant God, this God of heart, did just that. By way of doing so, He describes a part — and only a portion — of what His infinite role in the keeping of covenant with His people will be.

Continuing to speak to His people directly, He explains a few verses later in Deuteronomy the necessity, benefits and gift of the law. “When your son asks you in time to come, ‘What is the meaning of the testimonies and statutes and the rules that the Lord our God has commanded you?’ Then you shall say…the Lord commanded us to do all these statutes, to fear the Lord for our good, for our good always, that he might preserve us alive as we are today. And it will be righteousness for us…” (Deut. 6:20-21, 24-25).

His promise to us His people through the Abrahamic, the Mosaic, the Davidic, and the New Covenant is “for our good always.” That is His word. We dwell secure under the mutual terms of covenant; and while we are thus made “happy” through that heart relationship, as the psalmist tells us, God is “blessed” by it. He is enthroned on the praises of His people. (For a more detailed discussion of the clear distinction between happy and blessed in Hebrew and their use and meaning in scripture, see “The Heart of Happiness,” June 26, 2016.) An examination of just two instances in which the word heart appears in Psalm 119 is hardly sufficient to capture the full breadth of its importance. So I urge you to read through the psalm again and note for yourself the other twelve times it occurs. It is an entrance to understanding the inner man David and to beginning to comprehend with more clarity the meaning of the unique moniker “a man after His own heart.”

“The King of love, my Shepherd is/Whose goodness faileth never” wrote Henry Baker in the 19th century as he turned the text of Psalm 23 into an enduring and well-known hymn. I believe David, the musician, would have been pleased with Baker’s adaptation.  Although the words “King of Love” do not appear in the 23rd Psalm or any of his other poems found in the Tehillim, I think the poet would have agreed such a title to be a fitting one for the God he sought to know by heart and Who revealed Himself by heart to the man He chose to be servant king of Judah and who was ever seeking after His righteousness.

May our hearts seek after the same.